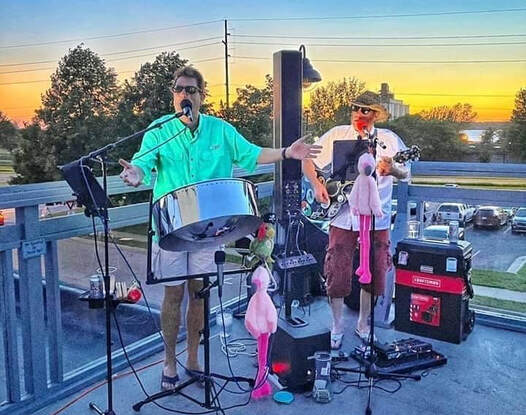 Two Dudes in Flip Flops is comprised of the "Brothers Grossenbacher".  Greg and Jeff will provide "Trop Rock for Your Caribbean Soul" via guitar, steel pan and tight vocal harmonies designed to take you to the islands.

Greg and Jeff have been performing music together for quite some time. They began with the bluegrass band "The Cedar Shack Gang", then they formed the "Sons-of-Beaches" - a Jimmy Buffett style party band in which they still perform today.  After taking a break from the SOB's for awhile, Greg began joining Jeff at his Thursday night solo steel pan show and the Two Dudes in Flip Flops were born.
​
​You can find them playing on various stages, decks or patios up and down the West Michigan Shoreline throughout the summer if you need some "Trop Rock for Your Caribbean Soul" stop in at a show and join in the fun!